I'm always thrilled to host Natasha Knight on my blog. I totally love her writing, it always just hits the right spots: great characters, a story that sucks you in, and of course, the hottest of hot sex and spankings.

Her Rogue Knight has just been released on Amazon, and I'm so delighted she's here to talk about it. I'm sure you'll all join me in wishing her congratulations and much success with her new release. And do try not to drool too much over the hot knight on the cover of the book.

Without further ado, I'll hand you over to Natasha.

When the idea to write a Medieval Spanking Romance came up, my first thought was 'no, it's not me'. I'd never done one before and I'll be honest, researching has never been a great strength of mine. I was (gently) nudged, however, to give it a try and so I did, deciding to write the first three chapters and see how it went.
I have to say, I had a blast. I found a photo which absolutely inspired the character of Gemma, the heroine, when I was looking into Medieval dress. That was the birth of the Archeress and the story took off from there.
In this scene, Gemma confronts Sir William about the emblem on his sword and his ill-fitted scabbard, accusing him of stealing it. Sir William, ever patient, but most definitely not a man to be toyed with, teaches her a lesson in respect…

“You should not touch a man’s sword without his permission,” Sir William said.
Gemma startled and looked up only to find him naked and dripping as he stood before her, his form momentarily shielding her from the sun, his manhood at about eye level.
She stood, willing her eyes to remain on his. “Your scabbard does not fit your sword,” she said, the challenge momentarily giving her the upper hand even as she was completely beside herself that he stood before her naked, his everything bared for her to see.
He eyed her, then bent to pick up his shirt. “You have a keen eye,” he said.
“And the emblem on the hilt of your sword. I know it.”
“Do you?” he asked, dressing himself fully now, not quite meeting her eyes.
“Yes,” she said. Inside, she was shaking and nervous, knowing she was confronting him, not sure at all she should be.
“And what do you know of it then?” he asked, his own challenge evident as he easily reached out a hand to take hers, the one that held the apple she had only just bitten into. He brought it to his mouth, her whole hand covered within his, and took a bite. The sound it made and the image it invoked as his teeth cut into the fruit made it hard for her to swallow. He watched her, still holding onto her upraised hand, his eyes boring into hers, penetrating there, the warning in them clear.
But Gemma had never been one to back down or be bullied. “Did you steal it, Sir William?” she dared ask, feeling how her hand began to tremble in his. “Is that why you hid on our lands?” she went on, a voice inside her calling her a fool all along but her mind unable to stop her mouth.
She had touched a nerve. She knew it instantly.
His hand tightened on hers for a moment, and emotion darkened his eyes. She watched as over the next moments, he regained himself. His throat worked as he swallowed, and he released her hand abruptly.
“Your imagination amuses me,” he said. “Are you ready for your lesson?”
“Lesson?” she asked, still staring up at him.
He gestured toward her arm where she kept her knife.
She nodded once, suddenly no longer aware of how hot she was.
“Show it to me,” he said.
She turned her attention to where she had sheathed the small knife and withdrew it, holding it out for him to see. He took it from her hands.
“A kitchen knife?” he asked, raising his eyebrows.
“I sharpened it,” she defended.
He touched the tip. “Yes, you did. Show me the sheath.”
She pushed the sleeve of her shift up to reveal the tiny leather sheath she had also hand made.
“Clever girl,” he said. “I don’t think you’ve used it much.”
She shook her head and took it back when he handed it to her. He held it by the blade so she could grip the handle.
With that, the lesson began. She tried to listen to his instruction as he spoke in detail of the different ways she could use it and the most effective given her size and strength. Throughout this though, her mind was still on their prior conversation. Was the emblem really what she thought it was? But that was not possible. Was it truly the dragon of the Knights of the Round Table? And if so, then who was this man? If he had stolen his sword from one of those fabled heroes, then he was an outlaw, a mercenary perhaps. He could be a part of her sister’s kidnapping—this whole thing a cleverly mapped-out plan to fool their father, steal their land.
She thought about the events of the last day, how he had come upon her just as she had been ready to shoot an arrow at one of the men who had stormed her home and run off with her sister. Was the plan all along to kidnap her too? Was it still his plan?
“Pay attention!” Sir William commanded, kicking her feet out from under her in one quick movement but catching her as they both went down to the ground.
She let out a cry as they hit the earth, bouncing once as he easily relieved her of her weapon and held it to the racing pulse at her throat.
“If you do not give your full attention, you will lose,” he said, his face inches from hers. “And if you lose,” he began, pressing the tip of the blade against her skin.
She made a small sound, her eyes wide on his as she lay trapped beneath him.
“If you lose,” he repeated, bringing his face so close to hers she could feel his breath when he next spoke. “You die.” 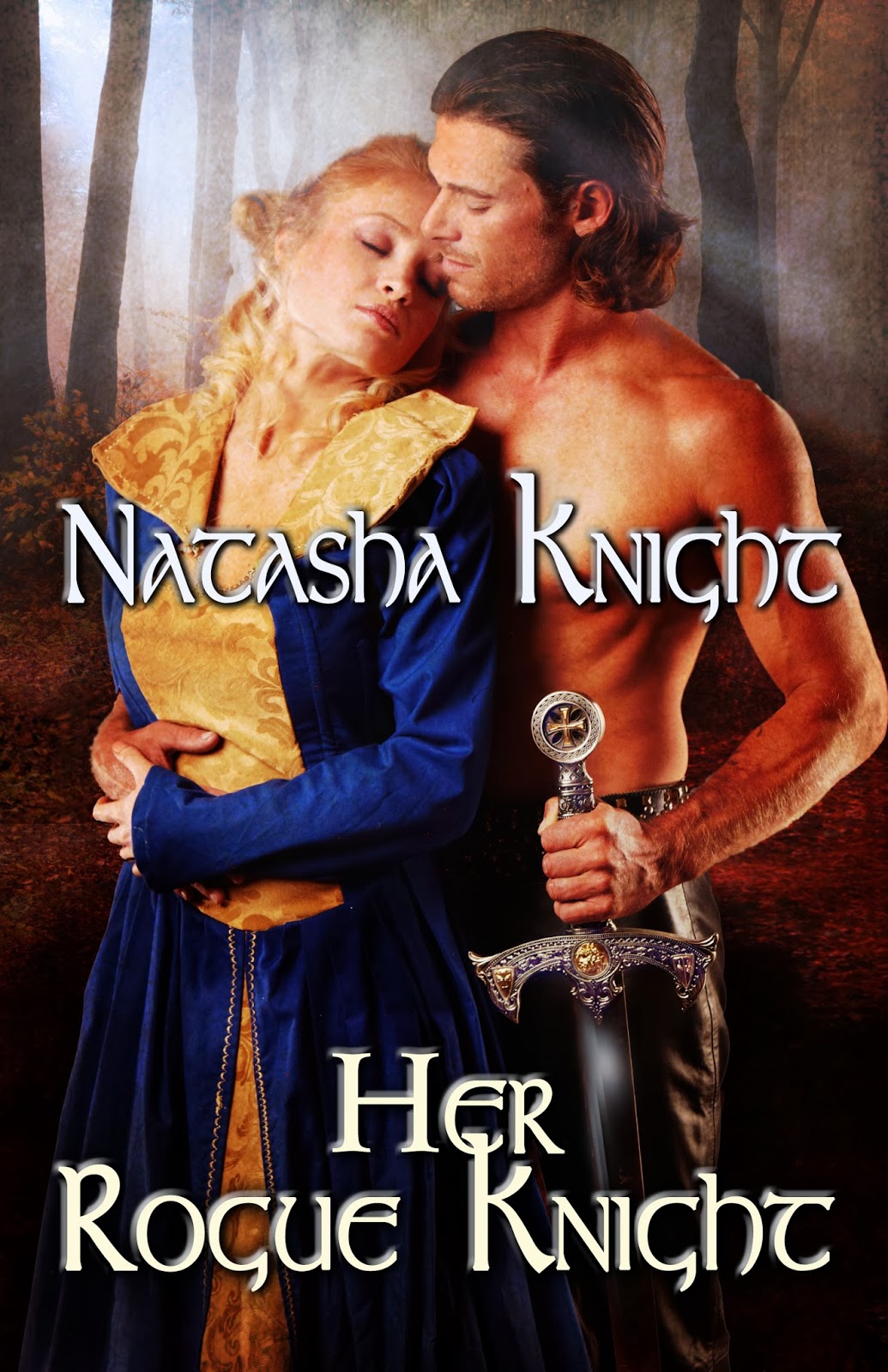 Since her mother’s death, Gemma’s aging father has grown weaker with every passing year, and she has all but raised her younger sister Alys. Lethal with a bow in her hand, she keeps her family safe… until the day they are caught by surprise and Alys is taken by a band of outlaws. In desperation, her father pleads for aid from a reclusive knight by the name of Sir William and pledges him Gemma’s hand in marriage in repayment for the safe return of her sister.

When Gemma ignores her father’s instructions and sets out on her own to rescue Alys, she discovers that this gruff, unkempt, and yet undeniably handsome brute is more than her match, and the lesson is brought home with a sound spanking on her bare bottom. With no time to waste taking the brave and feisty yet hopelessly naïve eighteen-year-old back home, Sir William has no choice but to bring her along as he pursues her sister’s captors. Though he might not admit it, however, he relishes the thought that he might have to punish her again, and with every glimpse of her delicious curves his lust intensifies.

In spite of his firm chastisement and his demand for her unquestioning obedience, Gemma finds her feelings for Sir William evolving rapidly. She begins to wonder what it would feel like to be stripped bare and held tight in his strong arms, helpless and blushing, yet longing for him to claim her hard and thoroughly.

Even as her desire for him grows stronger, she frets about the secrets he keeps from her. His skill in battle alone tells her that he is no mere woodsman, and the hilt of his sword bears a marking that cannot be mistaken—a symbol that she believed had passed into legend. Can she trust this man with her life and that of her sister? Will he fail her in her hour of greatest need, or will her rogue knight prove himself worthy of not only her submission but her love as well?