I meant to sign up for WIPITUP Wednesday but my day job is really busy at the moment and I totally forgot!  Instead, I am giving you a little snippet from a long distance maintenance scene from His Forever Summer. Just a little bit of it mind you!!!

As she peeled, Carla could feel her back end contracting and tightening. She had heard the other taken in hands talk of figging but had never tried it. She wished Kieran was here beside her, rather than thousands of miles away as she had her first experience. When it was peeled, Kieran told her to use her paring knife to shape it, and he held up a picture to his screen. She could see she was to put a little ridge near the end but leave the bottom thick and wide. Pretty much the shape of her plugs, she noted. Once done, she held it up for his inspection.
“Excellent, good girl. Now get on the bed and set the computer so your bottom is to the camera. I want to watch this. You need it so you can be up on your knees with your head and chest on the bed. Try not to lose the clothespins. Oh, and bring the wipes over too.” She did as she was bid, but it took them a few moments to get the computer and Carla in the right position for Kieran to watch. Finally he was satisfied. Then to her mortification, he told her to open her bottom cheeks with her hands so he could see her tight little hole. She wanted to die, but she obeyed. She had gathered he was going to watch the ginger going in, but at least the root would have obscured his vision. This had not entered her head. He kept her like that for a full two minutes. Her face was burning with shame. But of course he couldn’t see that. Oh no. He was too busy ogling her dirty little asshole. 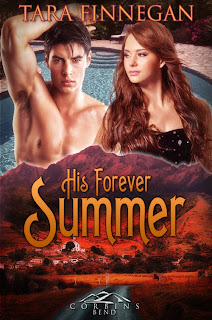 His Forever Summer
Carla Methon has tread on a lot of toes, men’s and women’s alike. But no one could be more dissatisfied with Carla than the lady herself. With a compunction to throw herself at every man within a three mile radius and a serious case of foot in mouth disease, Carla knows she is in desperate need of being taken in hand before she does any more damage to her reputation.
Kieran O’Brien needs to escape a broken relationship and he invites himself to spend a summer with his brother in Corbin’s Bend. But Kieran is a totally unsuspecting vanilla with no idea of the ethos of the community he is about to enter. The pair strike up an unlikely friendship of vanilla and spice, with one stipulation – it is only a summer fling. By the time Kieran boards his flight to return to Ireland he wishes his summer could last forever. Can he find the courage, not only to admit the extent of his feelings, but to take on the role Carla so desperately needs him to be?
Buy it now on     Amazon   |   Blushing Books   |   Barnes and Noble
Posted by Unknown at 11:08