Book review: As Natural as Breathing by Thianna D 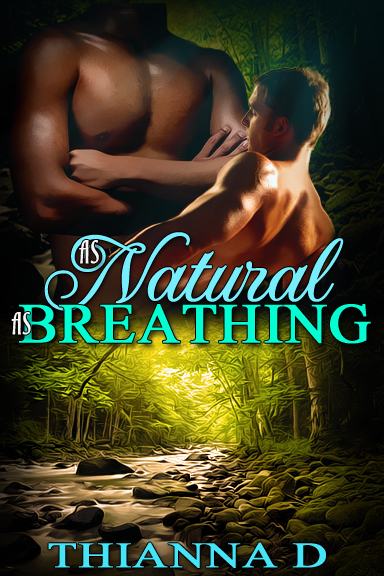 5.0 out of 5 stars Compassionate empathetic coming out romance August 13, 2013
By Tara Finnegan
Format:Kindle Edition
I have to be totally honest and say that previously if I saw a book classified under gay
romance, I probably wouldn't even give it a second glance, but this one caught my eye on
the Saturday Spankings blog hop, and even from a few sentences, the characters really
sucked me in. And I'm so glad they did as it was such an incredible read.

It's a story of two wonderful men.
Christian is coming to terms with his disablement, a result of an injury while in military
service for his country, injured for standing up for a gay man. He comes home from the war
broken, physically and emotionally and questioning his own sexuality. His experiences of the
bigotry he's encountered for coming to the assistance of a gay man make it difficult for him to
accept his feelings towards men, and to complicate things further, he does find women
attractive also.
Logan is a funny, compassionate man at ease with his homosexuality. His family and
friends love him and support him all the way. He's looking for a committed relationship
incorporating domestic discipline. The two meet and a friendship ensues. Christian
struggles to come to terms with his feelings for Logan, who is patient and understanding.
I watched and waited, begging Christian to just get on with it, Logan was too good to pass
up! Happily Christian does see Logan's finer points and the relationship blossoms.
I was totally hooked as Christian comes to terms with his sexuality, his initial fear of
coming out, the bigotry he meets from his brother, the love and compassion he receives
from Logan's family, his ex-girlfriend and his parents. The emotions run high in this
beautifully written book, and along with romance and doubts there is humour and a
constant sense of reality, both good and bad . I can't wait for the sequel because I now
feel these men are my friends and I really want to see how they develop in their new-found
love.

Publishers Blurb
For Christian Darringer, life isn’t worth living. Just back from the Middle East –
scarred and with permanent damage to one leg – he does not think anyone
will want him for anything. He hadn’t planned on meeting a gorgeous man he
finds himself thinking about constantly. Pulled toward the startling younger
man with striking blue eyes, he begins to question a lot of things – especially
his sexuality. Not one to hide from a challenge, he plunges ahead only to find
himself more than just attracted to Logan who is full of life and joy, he finds
himself head over heels in love.
Logan Mannette has almost everything he ever wanted: loving parents,
happiness, friends and security. The only thing missing is the love of his life,
a love just like his parents’. When he meets Christian at a party, everything
changes. Instantly attracted, he does his best to help this sad man and
quickly finds himself feeling more than he has ever felt before. Raised in a
domestic discipline household, he holds that ideal as what he wants but his
interest in spanking has become a fetish and when Christian admits he
wants to be spanked, Logan believes he might have found the perfect man.
Just as everything begins for them, Christian’s past intercedes and one of his
brothers makes waves about him dating a man. If not for Logan’s support,
he might have folded. But with the love of one amazing man, Christian finds
that living his life rather than just existing is as natural as breathing.

As Natural as Breathing on Amazon
Posted by Unknown at 17:26