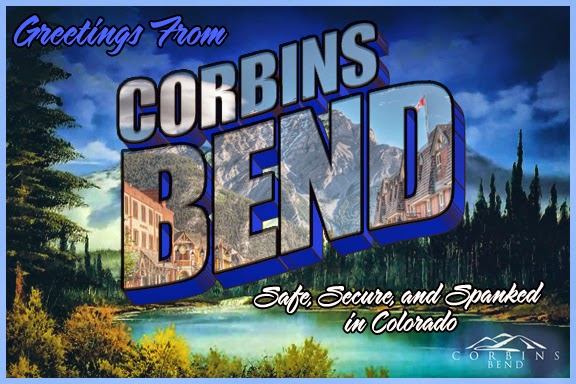 Welcome to Corbin's Bend where all your spanking dreams come true.

Today's links for the blog blitz are coming in as we speak. Here's what I have so far. To be updated later. Go grab your chance to win some goodies and learn about the fabulous residents of Corbin's Bend.


Who wants some more details on Kieran and Carla's first meeting? What? No one? Grr...well I'm going to force them on you anyway because I am no good at taking a hint :)


When she got to Jim’s house, she could hear the TV. Dammit she had forgotten that Kieran was arriving. She should have picked up the blueprints last night like she was supposed to, but she just wasn’t in the mood for being sociable.  Well, she’d pay for it now, she realised with a sigh as she rang the bell, rather than using the house key.
A tall, lean, unshaven man opened the door wearing only a pair of cut-off jeans. He smiled lazily, sweeping the door wide, totally unperturbed that she had caught him half naked.
“The lovely Carla, I presume?”  Carla felt her face heat. Was he laughing at her? What had Jim told him about her? Or maybe he was one of these Irish rogues she had heard about, flattering a woman into the sack. Well, he could save it; no way was she bedding Jim O’Brien’s brother. Even if he was gorgeous….and muscular….and had molten chocolate eyes. Not even the cleft in his chin was going to tempt her. Or the dimples in his cheeks. Or indeed the twinkle in his eye. No! Stop it! Especially not the twinkle in his eye, she mentally scolded, you know a twinkle is not good news.
“I’m here to pick up some blueprints,” she said, quite abruptly. “They’re in the office apparently.”
“Ah, that would be my bedroom now,” he said, eyes dancing with mischief. Carla gave a flustered reply, and headed toward the office. It smelled of man and beer. Definitely one to watch: drinks too much and enjoys flirting, she decided. She almost felt relieved.  As if writing him off as husband material gave her a sense of freedom. She didn’t have to impress.  She located the envelope and returned downstairs, deliberately averting her gaze from the open door of the master bedroom. She didn’t like to think what went on in there. She wished she could hate them, or even sneer at them as a miserable couple. But Carla didn’t have that luxury.  She headed toward the front door, not even bothering to go to say goodbye, but Kieran’s voice halted her in her tracks. She paused until he reached her.
“Will you have a coffee with me? My charming family abandoned me and left me to my own devices on my first day here and I don’t like talking to myself. The replies are most unsatisfactory.”
Although she still got the feeling he was having a joke at her expense it seemed rude to refuse so she went to the kitchen and filled a mug of coffee.
“Pancakes?” he offered.
“No, I’m dieting,” she said too quickly. He eyed her up and down.
“You’re officially mad. Have you looked in a mirror lately? You’ve a beautiful figure.”
That’s it, he’s definitely mocking, she decided. He was becoming safer territory by the minute.  Two could play at that game.
“And you must be pretty comfortable with your body, since you like to entertain half naked,” she retorted.


It was Kieran’s turn to look flustered. “Shit, sorry. I forgot, be right back.” Carla listened to the sound of his bare feet on the steps as he took them two at a time. She felt smug at making Kieran feel as uncomfortable as he made her. When he returned he had a crumpled tee shirt on.  He made some remark about his poor packing skills and not having got round to ironing. His embarrassment was quite endearing. It put them on a level footing.


Any comments here will enter you in a draw for a package of goodies from Ange or a $5 Blushing Books giftcard.