#Spanking A2Z E is for Enema and Exile to Unity

E is for Enema and Exile to Unity

Years ago I used to lurk on a forum, it no longer exists, as it was an MSN forum and they were all disbanded. It disappeared when I was absent for a few years as I was up to my neck in babies and had no time to lurk. Then when I went back looking for it, there it was gone. (Yeah, sorry for the Irish oxymoron)
The forum was a domestic discipline one. Sadly I have no idea what happened to it, or if a new one was set up on one of the other webhost sites or whatever the right term is. (Techno thicko strikes again J)
One very common form of punishment mentioned on that site was an enema. Makes sense in a way, many spankos tend to be bum people and often transcend many forms of anal play. The commonest reason it seemed to be used was for a potty mouth J A soap enema was one of the preferred methods.
Well, to cut a long story short, in Exile to Unity, Jim and Ange were going through a serious crisis that threatened the very foundation of their marriage.   He needed a serious punishment. Although Ange resisted spanking, basically it was a turn on for her. To some spankos you could beat them black and blue and leave them unable to sit for a week, but that still wouldn’t be a punishment!! And in my mind,  Ange was really that kind of person. She needed a lesson that wasn’t a reward.

Ange looked at where he was standing. Jim had one shoe off, which he had used to hammer a hook against the outside of the downstairs bathroom wall. He fixed the blue bag on the hook. She felt her anus clench at the thought of what was to follow. She heard the glop glop glop of the bag filling with water.
“See this hook? Tomorrow you’re going to find a picture to put here, and every time you look at that picture, you’ll know it’s only there to mask your shame, because from now on, this is where enemas will be delivered. And they’ll be delivered any time you hide things from me, or keep your feelings bottled up. Is that clear? If you keep things in, I’ll force them out. Simple.” 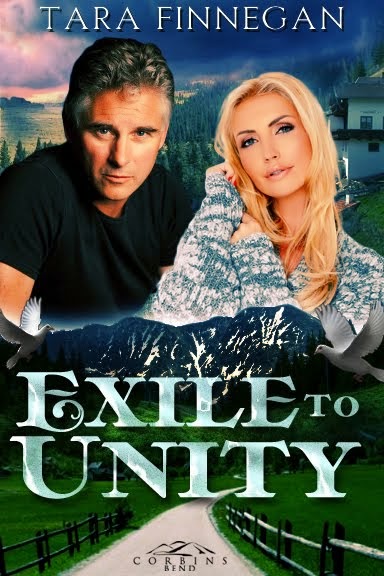 Corbin’s Bend and AdalaineRaine are both kindly featuring Exile to Unity today if you’re after another snippet or two. And aany thanks to Celeste Jones and Spanking Romance Reviews for hosting this challenge.