C is for Corbin’s Bend of course!! Could there be any other C?

I’ve noticed a few of the reviewers saying that whoever came up with this idea was inspired. Well the project was the brain child of the wonderful Thianna D, who came up with the brilliant idea, did all the behind scenes work, such as coming up with the community location and layout, created a stock of characters for us to work with, found authors that would suit it, and then got a contract for us all. And that was only the beginning! She has been ferreting away since. I guess you could say she is the community leader, or elder. I pinned her down (no, not that way, silly!) to have a chat with her on the whole concept.

Hey Thianna, Thanks so much for coming to visit again. It’s been a long while since your last visit.
I’m so excited to talk about your venture, Corbin’s Bend, and am delighted to be part of it.
Can you explain what the project is, and what inspired you to dream it up?

As to how it came up. I think it was June of 2013. I was doing my normal thing of putting pen to paper and letting words flow and the first three chapters of my Corbin's Bend novella ~Finding Their Bliss~ just poured out. I remember thinking as I was writing that this housing cooperative would make a really fun series. It was early to mid August as I was finishing up the first draft that I knew it would make an amazing series...especially if opened up to a vast array of amazing authors.

I contacted Staci at LazyDay, the publisher for my Logan/Christian series All They Ever Needed to see if LazyDay would be interested in such a series and she said she was and to keep her posted. Which led me to the next point. Inviting and gathering a set of amazing spanking romance authors who were interested in doing the series. I think I invited 15-20 amazing writers to join and was so thrilled that 9 of them were able to fit it into their schedules. Including you! Yay! 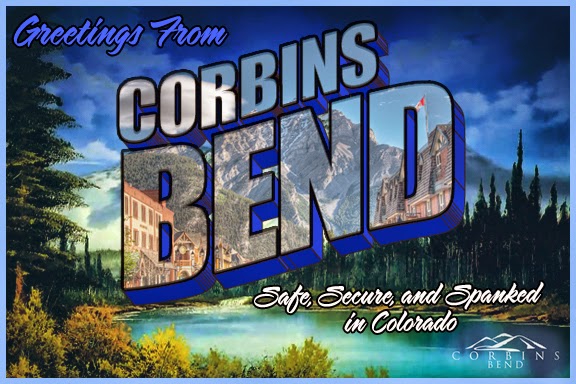 I'm so glad I could fit in! But tell me, you had your concept, was it hard to sell it to other writers?

For the most part, no. I think most of you saw the potential in this amazing series and jumped at it. A couple authors hedged long enough they missed out on the first set of releases, but I'm hoping this series will go on for awhile so there is plenty of time for them to get in down the road. I'm assuming the information I gathered and sent when I first contacted you all gave you the information you needed to make your decisions.

This is different! It's not a "traditional" anthology........it is a series that could become what we Europeans see as a soap opera  - is that your hope?
Yes, it is. I don't know if you have ever seen the TV show Gilmore Girls. It was about a mother and her daughter, but it was all the characters that made up the town that truly made the show such a gem. To me, that is how I envision Corbin's Bend. Characters used and mentioned in multiple books, becoming the best friends of those who read them. As you read each new book, you know you will see some of your favorite characters reappearing from time to time and the basic community becomes a home you want to come back to again and again.

For instance, the hero in my novella Finding Their Bliss, Brent Carmichael, is also the head of the housing board and knows everyone within the community. He will pop up from time to time just due to his placement on the board. I've already started dropping in your Jim into a future Corbin's Bend story I'm writing as well as having a large party which includes several characters in the Corbin's Bend stories.
So, yes, in many ways it can be considered a soap opera, a housing community the reader never wants to leave as it becomes more and more real to them and they can't wait for the next release to find out what happens in 'their town'. And the authors can't wait to write new characters or continue the story of other characters because they also want to return to Corbin's Bend again and again.

I have indeed seen Gilmore Girls and now I'm even more excited! I'm now figuring there is a series with stand-alone books? Would it be fair to say that you hope a reader could buy a book and enjoy it, but if they love it they could get more that the one stand-alone novella?

Exactly. Corbin's Bend is a series of interconnected novellas. Each book could be picked up as a stand-alone and read that way, but if they love it, there are many more books where they can read about their new favorite community. Maybe if enough of us fall in love with Corbin's Bend, it will become a real. *wink*

Brent Carmichael - Late thirties, former NYC police officer and idea behind Corbin's Bend. Used all of the insurance money he received for an on-the-job injury to get it going. Lost his fiancee to cancer years ago. She got him to open up to his need for spanking. He never thought he would meet another woman he would be so attracted to until he met Char Kendle.

Professor John Dunn - Has been a spanko all his life, but didn't realize until after his marriage how important his spanking fantasies are to him. Now a widow, he has moved to Corbin's Bend and teaches at a college an hour away. Falling for one of his students, who is also from Corbin's Bend, causes a bit of a shake up.

Joe Harshaw - Has a very traditional view of family-life and can't see how anyone can live without domestic discipline.

Father Henry Beauchamp - (pronounced Beecham, by the way) Lifelong, astonishingly experienced dom who sees no conflict between that and his faith and vocation. Another of Emily's non-alpha doms. Incredibly kind, but also, in the bedroom, an incurable sadist provided his partner consents completely.

Jim O'Brien - Fond of a pint or two, not necessarily for excessive drinking but for the bonding with the men. Somewhat gregarious and over friendly. A definite flirt, albeit only on the surface, dig a little deeper and he’s definitely a one woman man.

And there are just so...many...more! As the weeks go on, I plan on giving a little look-see into the characters in the series. I love Corbin's Bend. All races, all sexual orientations, and very different personalities. The one thing they all have in common is spanking.


There certainly is an array of great characters to choose from. Now that this fantastic series has kicked off and there are already three books available, do you see the series continue? And if so will there be an opportunity for new authors to get involved?
Thanks for that question. I definitely see the series continuing. There has been such a fantastic response from our readers and I hope this series will continue for many years to come. I am excited to say that very soon, submissions will be open for more Corbin's Bend novellas. When that happens, information will be on the submissions page on the rules and how to submit. At that point, submissions will be open to all.And just so your readers know, it will be announced. In fact, the post on the Corbin's Bend blog has already been written and scheduled. So those who are interested in writing for the series might want to keep their eyes on each day's posting.

Thank you so much, Thianna, for visiting and answering my questions. And of course for coming up with the whole idea and all of work you put into it. It's been a pleasure to have you here.

This is a blog hop. Pop along and see what brilliant C's are on offer