SpankA2Z M is for Master (NSFW)

M is for Master

Master….what a word.
To master something implies that you are in complete control, you have conquered your subject. That subject can be a person, or a knowledge or skill. A Master of a sub, or slave, to me means that the sub cedes control, but sometimes slaves fight back, even willing, wanton slaves. Once in a while, they like to be in control, however subtle that control is. Phrases that come to mind are topping from the bottom, or bratting. And yet, so many times, I’ve read that the sub holds all the power, so does that make the sub the true master? J This excerpt from Mastering  Maeve is an example of a sub (Maeve) wielding her power, in the most delicious manner, so skillfully that her master (Larry) is soon completely conquered.

“Get over here, wench,” he demanded in a husky voice and she inwardly gloated. This would be one of the last memories he had of her before he left; it would encourage him to come back for more. Feigning shyness, she approached him slowly.
“Lean over the desk,” he ordered.
“Should I remove my panties?” she asked.
“Don’t you dare.”
As she leaned over treating him to another wiggle, he hiked her panties up firmly between the cheeks, exposing her buttocks. Rather than starting straight into the spanking, he rubbed her bottom, then fingered the soft cotton.
“Wear these again tomorrow, I want your scent on them.” he told her. He raised his hand and brought it sharply down on one cheek, then before she had even drawn a breath he had repeated it on the other.
“Ahh, beautiful!” he breathed. His reaction added a new dimension of spice. She really had connected with his desires. It made her feel a sublime mixture of powerful and submissive as she gratefully accepted his firm swats, each one increasing in intensity and pleasure. She loved this intimacy. Maeve writhed and wriggled, not so much to escape his hand—although there was an element of that as it stung badly—but also to increase her pleasure as the mixture of endorphins and increased blood flow to her maidenly regions sent her into a forbidden frenzy. He continued to spank over and over. She wanted it both to stop and to go on forever. At each stroke she was tempted to call “Enough,” but as soon as his hand landed and the shock subsided, she knew she wanted more. Every time, she was torn like this. A little part of her wished he would push her beyond what she thought was her limit, but he always stopped just short. And yet when he did finally stop, she would have sworn on her life it was absolutely the last wallop she could have endured. He seemed to understand her limits better than she did.
When he felt she’d had enough, he paused, waiting. He fingered her clit over her panties and she rubbed into him harder, greedy in her need. He increased the pressure. Her juices smeared into her panties, soaking them.
“All the better to smell you with, my dear,” he said with a wicked glint in his eye. She was delirious by now. She let go of the desk and dropped to her knees. Her fingers fumblingly undid his fly. He was so hard it was difficult to release him without undoing the button, but she managed, releasing his engorged cock.
“No!’ he protested, but she wasn’t listening. She pushed him back against the desk into a semi-sitting position. She took him in her mouth, savouring his taste and his scent. The salty, musky essence entered her subconscious. Reason was out the window. She forgot about her own satisfaction as she sucked hard, teasing him, nipping lightly on the head of his purple swollen head. She flicked her tongue beneath the helmet, tantalising the sensitive nubs, and traced the outline of the protruding, bulging veins. His groans spurred her on. She was in charge now. She switched to harder, longer mouthfuls, taking him in as deep as her mouth would allow. He grabbed her head with both hands, intending to steady her thrusts, but somehow he just pulled her down more on him. She started using her hands at the base of his shaft too and he was weak, powerless to resist. She could feel him stop fighting his pleasure and he melted into her mouth, becoming one with it. Working with her. She could feel his cock engorge still further, even though she’d have sworn that was impossible. Then she could sense a small vibration, like an electric current. She knew his seed would follow and she was ready; as the hot, salty liquid hit the back of her throat, she accepted it willingly. She had conquered him for once. 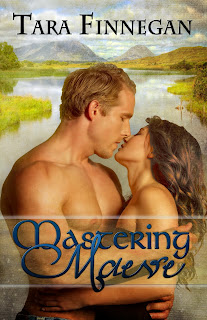 Blurb:
Finished with college and unable to find a job in her chosen field, twenty-four year old Maeve O’Reilly saw little choice but to return to her hometown in Connemara and work in her grandmother’s hotel. Maeve has barely walked in the door, however, when she learns that the establishment is deep in debt and an American visitor is considering an investment which could be the only chance to avoid foreclosure.
That visitor turns out to be a tall, ruggedly handsome rancher by the name of Larry Williamson, a man whose dominant personality immediately puts him in conflict with the willful Maeve. When she slaps Larry across the face during a heated argument, Maeve learns to her horror that Larry is more than ready to haul her over his knee and back up his firm tone with a firm hand applied to her helpless bottom.
Larry might like to tell himself that he has chosen to move forward with the hotel investment only to avoid any legal difficulties stemming from the spanking incident, but he knows full well that there is only one thing in Ireland he is interested in right now, and that is a beautiful, feisty, sore-bottomed young lady named Maeve.
As the days pass, Maeve quickly finds her anger at Larry fading to grudging respect, and the memory of his chastisement begins to kindle a powerful need within her… a need only the arrogant, bossy Texan can satisfy. Maeve longs for Larry to strip her bare and claim her in a way no man has before, and when at last he does all she can do is beg for more. But will the wide gulf of the Atlantic and the hard realities of a long-distance romance tear the unlikely couple apart, or will they find a way to defy the odds and forge their passion into a lasting bond?
Publisher’s Note: Mastering Maeve is an erotic novel that includes spankings, anal play, sexual scenes, elements of BDSM, and more. If such material offends you, please don’t buy this book.